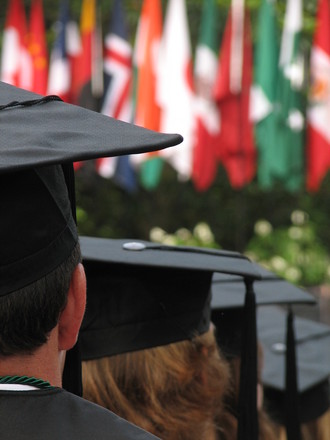 The most common myth you will hear about education is that it’s not worth the money. Why bother spending money learning when you could be making money with extra hours at work?

This argument is so old-fashioned it was answered in the Bible! In 1 Kings: 3, King Solomon was supposedly offered a wish. He could have asked for beautiful golden jewellery or amazing musical instruments or fabulous clothes. He didn’t. He asked for wisdom, which according to God was the correct answer.

Education is not as valuable as warm clothes, food, health and a place to sleep, but it’s still one of the best investments you can make. Education is much more valuable than the newest phone, television, car or sofa. All of these will all only be new for a couple of years, whereas you will benefit from educating yourself every day of your life.

Another common myth about education is that intelligence is hard-wired and not everyone can learn.

This one is not quite as old, but was still answered in Shakespeare’s time! Back then, people asked whether girls were clever enough to be taught at schools. Considering the case of Queen Elizabeth I ‘our diamond at home’, who was highly educated, one scholar gave a resounding answer:

"Our country doth allow it, our duty doth enforce it, their aptness calls for it, their excellence commands it" (Mulcaster, 1581)

If you are reading this, you must have learned to read English at some point in your life. Humans continue to be able to learn in adulthood. For example: you can probably drive, and you probably know the words to your favourite songs. Learning is difficult but it can also be fun; imagine all the things you would have missed out on if you had never learnt to read!

The Time Myth says that the only way to learn is to quit your adult responsibilities and go back to education, but this is not possible for people with jobs, mortgages or children. This is a fair criticism of the traditional full-time model of education. However, that’s not the model of education which is used by most adult learners.

For example, travellers do not spend most of their time learning the local language, but they will pick it up eventually. People being trained at work do not give up on working while they learn, they learn alongside their jobs. People learn and remember current news just from hearing it in snippets a few times a day.

This flexibility is one of the reasons that distance education is becoming more and more popular. At the Academy for Distance Learning, our learning is 100% student-centred. That means that learners with children can study at any time of day or night. We also don’t have “term times”. Learners with seasonal jobs can study in winter-time only and learners with full-time jobs can study every Sunday evening throughout the year (or any other time of week). Give it a try!