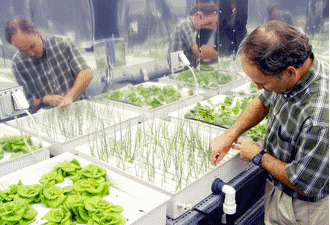 Hydroponics is the sort of thing that conjures up images of a scientific far future, growing plants perhaps on space ships or in great domes on Mars.  It certainly sounds like the sort of brainy thing that conventional gardeners and growers would have nothing to do with.  Far too complicated, advanced and hey, what's wrong with good old soil to begin with eh?

As it turns out, plenty.  Hydroponics is more efficient in space and water and constantly returns results equal to, or in some cases better than, regular methods of growing.  In this article, we take a look at some of the reasons any gardener might want to make the switch and bring hydroponics into their growth plans.

Wait Hydroponics?  What are you talking about?

Hydroponics is basically the science of growing plants without using soil.  This is accomplished by growing the plants with a nutrient solution that is disolved in water.  Sometimes the roots freely reach into the water, and in other cases, they may grow into an inert substitute such as gravel.  As a method of food production it is something that is seeing an increased amount of interest in areas that are lacking in traditional soil.  Space scientists are amongst the foremost using it, but it also has other applications in countries and regions with poor soil conditions and a lack of water.

The biggest advantage that Hydroponics offers the grower is its efficency in terms of space and water usage.  Traditional plants grown in soil will spread their roots out in search of moisture and nutrients to feed the growing plant.  However in Hydroponics, this is unnecessary.  By having their roots submerged in the nutrient rich solution, the plant does not have to expend as much energy in growing its root network to feed itself.  Long story short, you can plant more plants in a smaller area increasing your yield.

But it's not just space saving – traditional agricultural methods are horrendously inefficient when it comes to watering plants. Consider what happens when you take out the watering can over your lettuces.  Sure some of that water works its way into the roots and from there into your plant, but the overwhelming majority is wasted.  It soaks into the soil, used by other plants and organisms, or it evaporates from the surface of the plant or ground before it can be used.  As a closed system, Hydroponics is far more effective in areas where water is scarce.

No Weeds, No Pests, No Fuss

Furthermore, as a closed system, hydroponics gives you a much greater amount of control over what is brought into it.  This makes it much easier to remove the potential threats to your plants either by competing with other plants or from insects and animals eating and damaging your plants.  Without roots in soil, your plants will not suffer from exposure to soil borne diseases.  And if something does become compromised, it is much easier to contain the damage and remove the damaged produce than it would be with traditional crops in a field.  No more weeding!

Freed from the threat of unwelcome insects and provided with nutrient rich food, your plants can focus on the task of growing, meaning they will reach maturity far quicker than their soil based cousins.  Extra harvests are a certainty.  And because a hydroponic system can be pragmatically setup sheltered from the elements indoors, you can continue to grow all year round.

For all its promise, however, Hydroponics remains a science, as indeed is all horticulture.  Just as you would not expect great results from dropping the seeds of an apple you ate into a plant pot, so in order to succeed with hydroponics you'll need to learn best what works.  That's why it's a good idea to take up a course to complement your journey into this new and fascinating discipline.  ADL already offers a course in hydroponics that is an ideal starting point for growers old and new looking to get into this science.  You'll learn what equipment you need, how to set it up and how to grow the plants you need.