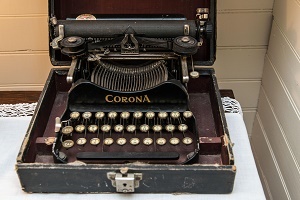 Nanowrimo season is upon us once again meaning it’s time for the creatively minded, or those who just want to write, to prepare their minds, sharpen their pencils, charge their laptops and prepare for a horrendous caffeine overdose that they’ll still be feeling six months later.

“Nanowrimo” says I, an unnatural grin on my face.  “It’s the name of the National Novel Writing Month competition that challenges people to write a 50,000 word novel in the month of November.  Participants need to sign up on Nanowrimo.org which has all the rules and information.  Oh, and it’s free to join (though you are encouraged to donate to one of their associated charities).”

“Sounds like you’ve done this before” Davey says barely able to mask his enthusiastic yawn.

“Been there, done that” I reply with a wink.  “And here’s a few tips I picked up along the way…”

For a serial procrastinator like myself, starting earlier is completely against my nature.  Nevertheless, you’ve only got 30 days to get your 50,000 words written.  That’s roughly 1,667 words every day you need to write or about 3-4 pages of A4 text.   Every day you don’t meet at least that quota, you’ve got that much more to do on subsequent days.   And believe me, you don’t want to be sitting staring at your word processor on November 28th with 30,000 words still to go.

There’s nothing like getting people you know to give you encouragement and disapproving glares in equal measure during your creative writing project.   Telling other people about your goal will make you accountable to them which can provide a useful jolt of encouragement to get you writing.  After all, being asked about your novel when you haven’t done it is really, really awkward.

Writing is a lonely activity.  People who have never written a book before think it’s easy – just write a load of words.  But it can be a real struggle after the first few hundred to keep going.  Fortunately Nanowrimo has exploded into a world wide event and there are support groups both online and that meet in the real world in a huge number of different places.  You can search for them on the Nanowrimo site.

The challenge is to write 50,000 words.  Not 50,000 good words.  While you might end up with some sort of Booker prize winning success, the reality is the story probably isn’t going anywhere at the end of it.  And even if you do go the publishing route, it’ll have to go through several drafts and rewrites before it’s ready for publication.

So don’t get any hang ups about whether whatever you’re writing is any good, has proper grammar and spelling or even makes any sense.  Let yourself go and follow your inner scribe.  You’d be surprised what you can come up with and the best bits of a novel often end up writing themselves.

#5    Take Pride in Your Achievement

Not everyone can write a 50,000 word novel.  It may not be a diploma, PhD or accolade for being the first person on mars, but it’s still an achievement and one that most people can’t boast.  Once it’s done, the fact that you have done it can never be taken away from you.

So have a little pride in yourself.  Every word you add to your manuscript is one more than the people who gave up before you or never started did.  And of course, achievement should come with reward.  Spoil yourself – You’ll have earned it!

PrevPreviousPeacemaker in the Office – Why Business’ Need Counselling Skills.
NextGrowing Your Own: PumpkinsNext