Essentially solitary and circumpolar in distribution, usually on outer edges of pack ice, but does range widely to most Subantarctic islands, including South Georgia and the Falklands. Adult females, considerably larger than males, reach a length of some 12ft (4m), males about 10ft (3.5m). Upperparts darkish grey and underparts light grey, with spotting on throat, shoulders and sides- amount of spotting varies. Overall appearance rather reptilian, with a disproportionately large head for its long, slim body line. At close quarters the wide gape and three- pointed cusp- type teeth are distinctive.

Now fairly uncommon, although at one time was a regular visitor to certain beaches. There is one unconfirmed record of breeding. More commonly seen in winter, but may haul out at any period of the year. Appear to prefer open sandy beaches, or perhaps they are more difficult to spot on rocky surfaces. Feeds on a wide range of food, taking fish, squid, krill, other species of seal and penguins. Perhaps due to its carnivorous habits and appearance, has rather a bad reputation for being fierce toward man; however, there are no recorded incidents of unprovoked attacks. Perhaps in time this reputation will change in much the same way as it has done with the Killer Whale. 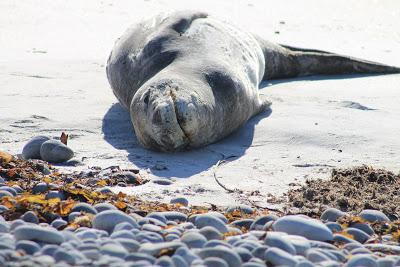 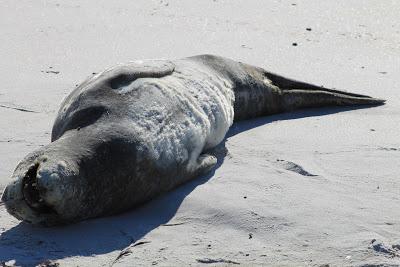 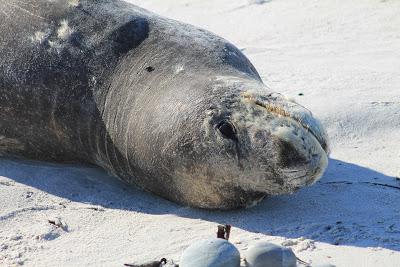 Setting camp on a remote Falklands beach, one of our group said “Look, a leopard seal!” From a distance of maybe a quarter of a mile, we instinctively knew it was a leopard seal. I have never seen one before apart from on TV or books, but even from that distance it was distinctly so, lying high up on the shore and motionless. Taking cameras, and abandoning our unfolding camp, we just moved as quick as we could towards it, knowing this was a rare once in a lifetime event.

Approaching with caution, we could see the creature was not fully alert, and looked entirely exhausted. Knowing as I do now, that leopard seals are rare visitors to Falkland, and rarer still in summer, and that they most often come from South Georgia, a swim of 1550km, the state of exhaustion is not surprising. Given the size difference between males and females, I am going to say I think it was probably a female, as she was a good size. Even though she was motionless, we gave her plenty of respect and kept a reasonable distance. Her breathing movements were evident, but more so her heart was pounding at a rate of (I would guess) over 120 bpm. She had obviously come a long way, and hauled up to rest at great cost. We took some photos, made observations, and moved on. 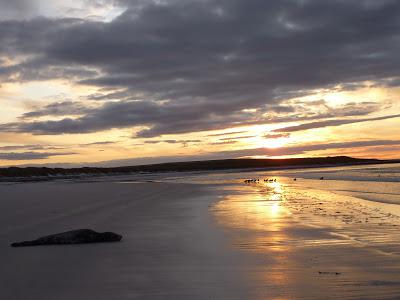 I later found out that in the austral summer, male leopard seals are in the habit of hanging upside down in the water and making mating calls in order to summon a female. Was this a female who had been lured by a siren call? Or maybe a bold large male who had drifted too far from the subantarctic currents in search of a mate? Certainly there were no signs of wounds which might suggest an acrimonious fight over a female, or warding off unwanted attention. Maybe our seal was a female who had recently conceived and was looking far and wide for a suitable niche in which to birth later on in the year. We will never know what circumstances led to the arrival of the leopard seal on the beach, but as the omens looked bleak for her, we shared a moment and moved respectfully on. 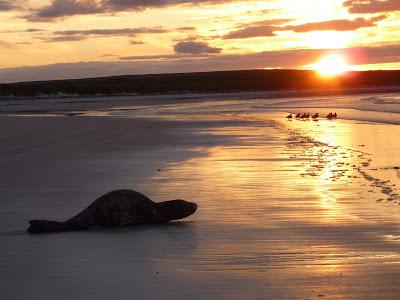 Later in the evening, as the sun was setting, and we were making food before the spectacle of night swept the Cape, we again saw movement from the direction of the leopard seal. Making our way down to the shore, we could see the leopard seal was on the move and looking much better. Her movements were smooth, muscular and undulating as she edged her way down to the shore (a journey of a hundred and fifty yards or so). Every so often, she would pause and these punctured moments in time allowed us to photograph her in the light of the setting sun. Patagonian geese amassed at the waters edge, goading her on. The waves beckoned her back to the deep nourishing womb of the sea where she could be replenished by cool waters and plentiful food. The final 20 yards or so were a joy to watch; her glistening skin lapped by the tides, until she was buoyant and absorbed again into the sea. With powerful muscular movements our leopard seal slipped into the night, with only swirling foam to remind us of the drama we had just witnessed. 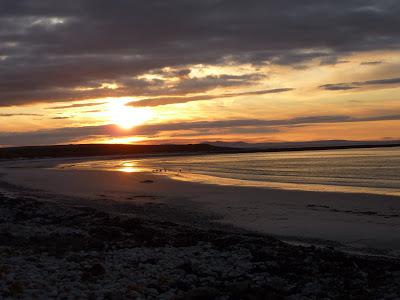 ADL offer a variety of courses in Ecology, Conservation, Agriculture and Wildlife Management.

PrevPrevious3 Tips to Create your Own Wildlife Garden
NextSo, you’ve got a great plotline. What’s next?Next