Many of you will know me as your tutor for many courses with ADL and some of you will be wondering where I have got to recently. I took a sabbatical from my tutoring because I have travelled to Ecuador – not on a holiday but to volunteer as a teacher in the University in Quito. I am also hoping to see more of this amazing country and the plants here – it is truly a botanic dream. 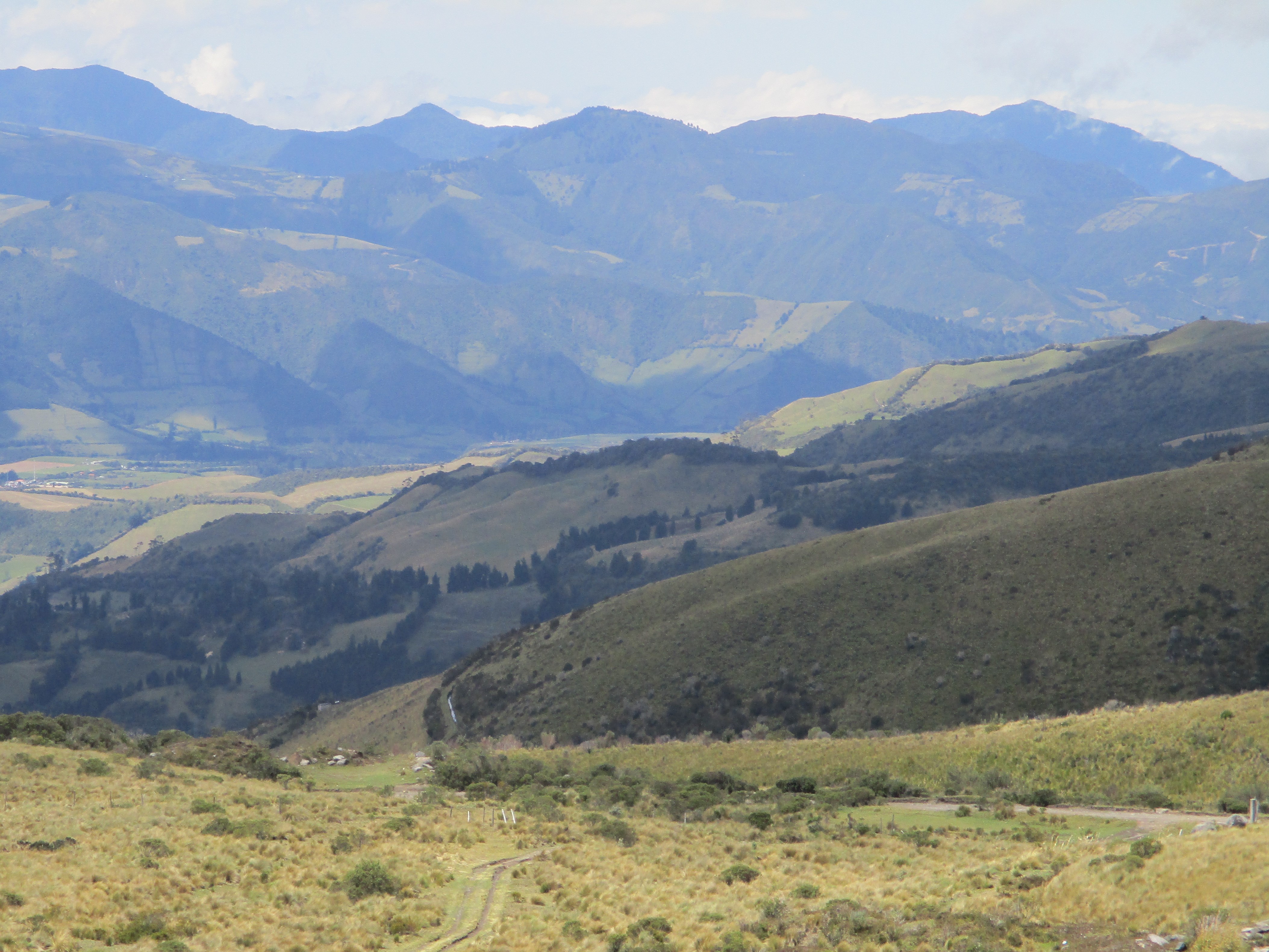 So far, I have been based in Quito, the capital. Quito is noisy, very polluted, very high (the 2nd highest capital city in the world) and never seems to sleep. They do have a quiet period – from about 1am until 1.15am when it starts up again. Sounds of Quito include constant honking – horns are used constantly along with car alarms, which go off at random times. Couple that with Quitoans love of flashing lights and you get the picture. The buses and taxis are endless and you have to be careful with taxis because, though they are cheap, some are not licenced and so you have to check they have the city stamp on the side, orange number plates and that they use the ‘taximetro’ or you could get over charged or worse, taken to a far corner of the town ( which stretches over 22km) and robbed and left to make your way back home – not a very inspiring prospect. The buses are crowded in the extreme – personal space does not apply here – and the fuel they burn leaves clouds of smoke so dense, that sometimes you can’t see the car behind. In Quito, you don’t go out after dark alone, don’t use buses at night and must always be vigilant. The administration is endless, with forms for just about every transaction which have to be replicated, your passport shown and as for credit card use – forget it.

All that said, there are so many positives and I am learning not to be a spoilt westerner. Quito holds some treasures in its busy, meandering streets which surprise and delight. The Centre Historique, which dates back to pre-colonial times, contains many churches, squares and museums and a lovely road called ‘La Ronda’ which is a restored street, largely in keeping with how it was a hundred or more years ago. Quitoans are friendly, helpful and generally very patient of the ‘Gringos’ who try hard to speak Spanish but will never sound like a native. They are also generous and warm and love music and arts. They are proud of their city and country and I am fast learning why.

Ecuador has some of the most diverse and interesting landscapes anywhere on Earth. It has coastal regions, vast barren flats, jungle, the Sierra region, which is a high plateau at just over 9000 feet on which Quito is built between two Andean ranges, and the Andes themselves, which have mountains and hulking giant volcanoes, the tops capped with snow. Quito itself is surrounded by tall mountains, their jagged tops contrasting with the pale blue of the sky. If I ever feel overwhelmed by the city I only need to look up and there they are, natural guardians of this city of eternal spring – so called because the weather can turn from hot and sunny to windy and cold in the blink of an eye.

Largely due to the different landscapes there are many peoples here. There are those of direct Spanish descent, the mestitsoes, who are a mix of Spanish and indigenous and 28 indigenous groups, most of which are still here, living among the rest of the people with their unique dress and customs. Otavalo, a town about 30 miles or so away, has a large indigenous population and the men all have long black pigtails. The women and children wear wonderfully elaborate clothes with beautiful lace and woven hats. Music is everywhere – largely the pasado which has a rhythm which sounds like a three-legged limping donkey – but also 8 or so very different rhythm based music. There is also jazz and I have been lucky enough to be part of the Ecuadorian Jazz Society. There will be a Jazz festival here soon, and I will be attending a concert. I have enjoyed classical music and there is music in the streets, on the buses and in taxis. I have also arranged to meet a guy who played with Duke Ellington, so there is a richness here I was not aware of.

And of course, there is that most special and delicate ecosystem – the cloud forest. I have been lucky enough to visit the cloud forest, which is pristine and begins just over an hour from Quito. For me, as a botanist, I was suddenly faced with everything I had ever studied botany for right in front of me. A delicate and precious forest where legendary trees like the Kitchwa tree, ‘the tree of life’, support a myriad of other plants, from bromeliads found nowhere else on Earth to orchids and ferns and even other trees. It truly was awesome. A terrifying ride across the valley in a metal cage slung on a cable, the Tarebita – or Terribita as I called it – over 150 metres above the tree canopy took the riders to a sumptuous and wonderful craggy valley with several waterfalls and the most diverse plant flora I have ever seen. Along with this was the wild life, from hummingbirds giving a private display as I sat by a waterfall to beautiful butterflies with flashing red spots on their wings. A bird feeder at the hostel was frequented by hummingbirds and a toucan could be heard from the bedroom announcing its presence with its echoey, loud call.

One thing noticeable in Quito is the lack of insects – the flowers tend to be huge and this is because the main pollinators are humming birds. The lavender bush in front of the house was where I saw the biggest one and the local park the tiniest one – just over the size of a large bee. In the cloud forest the opposite is true and the insects provide yet another reason to marvel.

After just over 3 months here I am still finding out about the country, hearing from my students of volcanic lakes I should visit, interesting towns and places such as the area where three towns next to each other each have a different climate due to their altitude.  I have yet to visit the Amazon, but I have booked to go in March so I am prepared for more surprises.