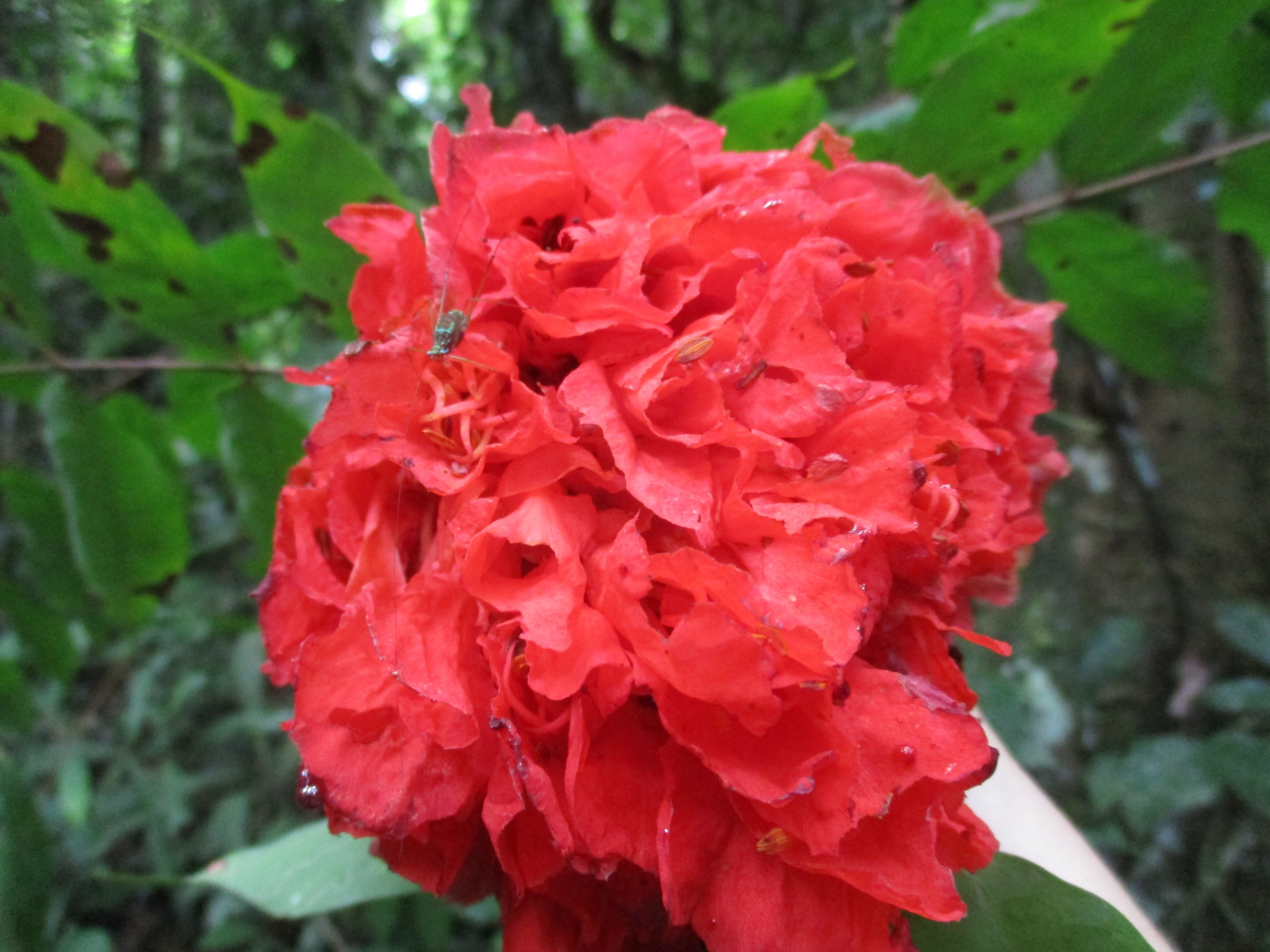 This has been an incredible month. A lot happened at the university where I teach, including a surprise party thrown by some of my students to celebrate the end of another teaching cycle. I start my final cycle next week. They are incredible students, keen to learn English even from a mad Botanist like me. They gave me little gifts: handmade musical instrument brooches and a very strange key ring featuring a ‘diablo doble’. The 'Diablo doble' is a mask people sometimes wear during dances and my students knew I was intrigued by them and the music. Half way through the surprise party, the biggest pizza I have ever seen arrived curtsey of one of my students who runs a Pizza place. It served two sets of students at least twice! The generosity and thoughtfulness of the students never ceases to amaze me and they more than make up with the almost mind-blowing form filling which being a teacher here involves. We have exams for students every two weeks, then re-setting, marking, discussing, re-arranging materials and each process needs forms, forms, forms. But the students more than make up for it and the teaching itself is a joy.

A real highlight was a trip to the Amazon rainforest, four days in Sani lodge, which is run by the Sani community. This business provides funds for their school and environmental project, so I was more than happy to enjoy the nice wooden lodge with proper bathroom and lovely food. The staff were superb and really took care of us. We had a resident Caiman called Lucy who lived by the bank under the decking where we got into canoes – she stayed local because she had eggs on the bank and they look after them.

Getting to the lodge takes a 9 hour bus ride from Quito. Seeing the changing soil, vegetation and then plants changing as we descended and crossed the Andes. We stopped regularly for ‘banos’ (toilets) and to buy drinks. We stayed overnight in Coca, a bustling, busy town on the edge of the Amazon, once home of the oil industry. The oil industry is still present, but not on the scale it once was when drilling was first done. The next day we had an early start, meeting on the quay, followed by a two hour motorised canoe ride. I thought ‘motorised canoe’ would mean a gentle motor down the river but this was fast so we covered a lot of miles and the river was the widest I have ever seen. How the pilot found the deep channels I shall never know as we weaved from one side to the other. But he did and we arrived at a small quay deep in the Amazon two and a half hours later. 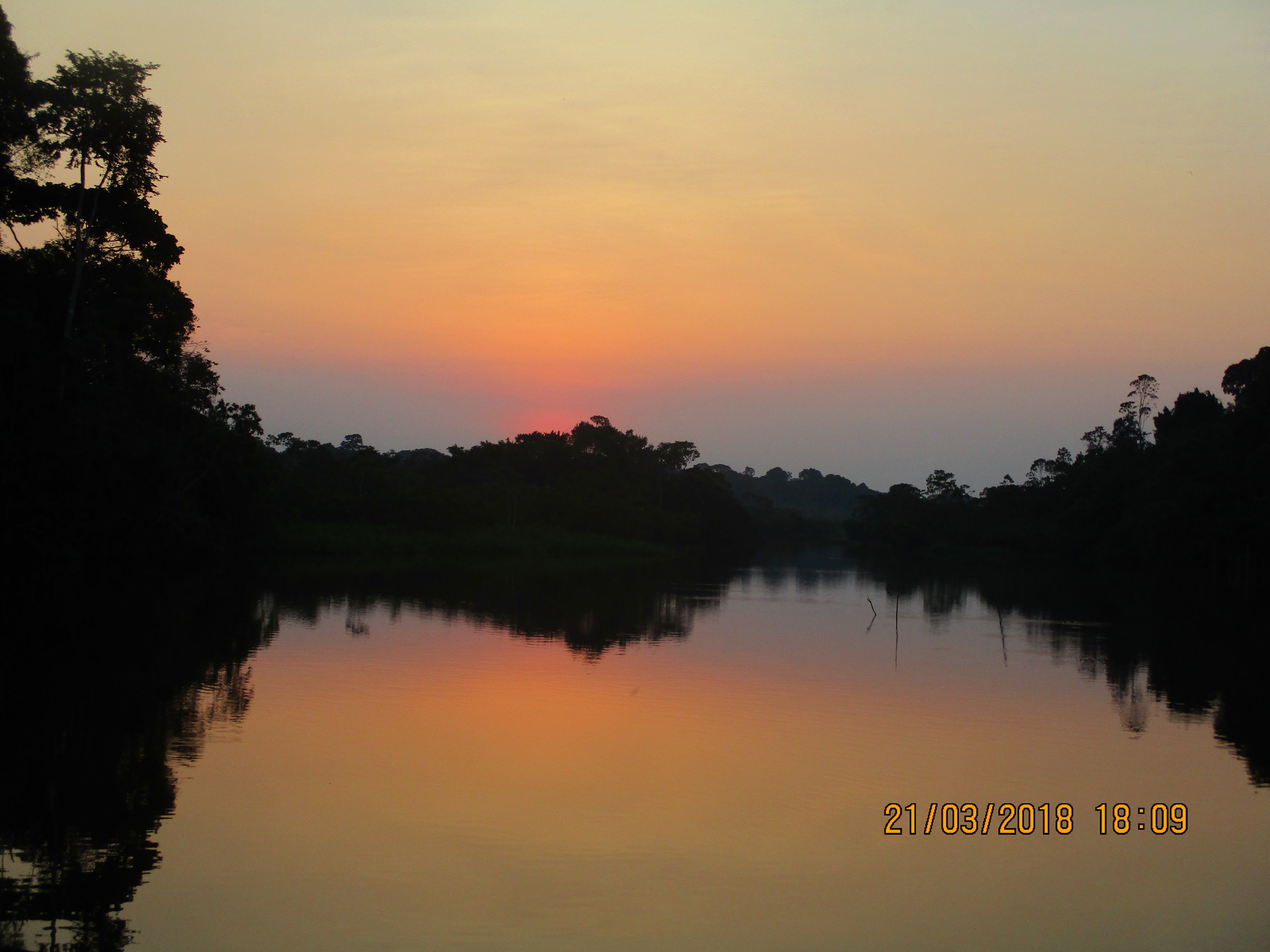 We passed several small communities and a few small oil drilling stations, one with flames blazing away, burning waste. Then we walked for about 20 minutes along a board walk and met our guide, Victor. Then into a small paddle canoe for about 40 minutes along a small creek and then the oxbow lake – incredibly beautiful and the water was full of life. As an oxbow, it had once been part of the main river Napo (a tributary of The Amazon). The animals, such as the fish, had multiplied, attracted predators and the ecosystem of the Oxbow lake developed along its own slightly different line than the river itself. We saw our lodge and were given a schedule.

Over the next few days, I walked further and across more difficult terrain than I ever thought I would. I got stung by bees (who went into my rain poncho), spent three days in Wellington boots – which proved unlikely but more than adequate footwear for the Amazon in the rainy season, saw more wildlife than I thought we would and learned so much from our guide who had never been out of Ecuador but his English was great, his knowledge of plants and animals immense and he also asked me things like how to tell the pollination mechanism of a flower from the structure. We discussed the environmental impact of the oil industry, which Ecuador needs, but also the need to preserve the massive part of the Amazon, a huge area of over 2000 sq km (but this is still only just less than 2 percent of the Amazon itself). Mostly, I learned about the plants and animals there and there was just so much. Our guide could spot a camouflaged sloth or anteater high in a tree, he could tell the difference between wind, rain and a monkey in a tree, he knew that capuchins travel often with squirrel monkeys and he could pick up a fruit and tell you what had fed on it and show you the teeth marks. He could show you the difference between the signs of peccary and tapir and how different plants were once used for medicine and jungle food.

I learned a lot – it really was another world. I realised how helpless I would be without Victor and a man with a machete who cleared the ever-encroaching undergrowth form the creeks and trails and I learned how much I needed to reconnect with nature and understand and learn again the connections that exist in our ecosystem. I found myself, on the one hand, sad at the oil industry encroachment . Their impact did not seem high, but Victor explained that the flames burning waste pollute the air and the light attracts many insects which are valuable pollinators. They die in the flames both night and day. Rain falls as polluted rain, the river is not as clean as it was and the government have ruled that, although the local peoples own the land, they do not own what is underneath it, creating an immediate problem between the oil giants and locals.

In the site I was in, a large oil company had asked if they could drill there in return for providing the community with money to build an eco-lodge to generate income. The community elders agreed and drilling was done but no oil was found. Amazingly, the company still gave the money over (sometimes they don’t) and Sani lodge was built. However, the oil companies want to return to the site and explore deeper – made easier by the new ruling about ownership of the ground beneath the site – and although the current community elders have not agreed, our guide was very worried future ones would because you cannot deny people the right to education, medical care and other things associated with progress. The elders have to make decisions which benefit the community – it is a difficult choice and I cannot and will not judge, but it is worrying.

A species list of animals alone included black caimen, red howler monkey, woolly monkey, capuchins, squirrel monkey, two-toed sloth, scarlet macaw, yellow macaw, yellow headed vulture, king vulture, black vulture, weaver birds, long nosed bats, millipede, frogs, huge fish, piranha, giant river otter, boas, tarantulas and many, many more. The positive things were that the Amazon still feels huge and we were just on the outer areas, even though we had travelled several hours. Also, the oxbow lake is now no longer safe for swimming because the black and spectacled caiman have recovered in population numbers so well, they now pose a threat to visitors. This is a good sign of a recovering eco-system.

I have not even begun to name the plants I saw – their strange shapes and forms, including cauliflowery which exists only in the neo-tropics when flowers and later fruit or seeds appear directly from the stem without a pedicle or stalk. It was incredibly diverse and I expected clear canopies like we have in Europe but the canopies are often hard to distinguish and there are some trees called emergent, which can be several species, but an emergent is a single tree which shoots up massively high and forms a canopy only once it reaches the top, so many straight and huge trunks result. The under storeys are complex and not as bare as I expected, given the canopy cover. The canopy is so thick that, even in heavy rain fall, it can take 20 minutes for the rain to reach the ground. The canopy diversity also means as you walk, there is an ever changing atmosphere as the light varies from dark, almost black to very clear and bright and the vegetation can completely change in a metre due to these differences. Also, when a massive event happens (hearing a tree fall was a real experience) in the forest, a completely new ecosystem takes over, making the most of the light. I also had the heart-stopping experience of a bread fruit falling about 50cm from where I stood. Bread fruit are huge fruit and the sound it made as it fell was awesome.

It has been an amazing month, and only a few more to go before I leave Ecuador. Next, we will be visiting Peru and Bolivia for a month each respectively.