The Decline of the Angel Shark in Europe

The angel shark (Squatina squatina) is a flattened kind of shark which looks a bit like a sting ray. It usually grows to about 1.8 m long (about as long as a human is tall) and it lives in sandy and muddy areas. It specialises in ambushing fish at night while buried on the seafloor (Ellis, Pawson and Shackley, 1996; ICES Advisory Committee, 2017). It’s also one of the most severely endangered species in the UK right now, although you aren’t likely to know much about it.

From Common to Critically Endangered 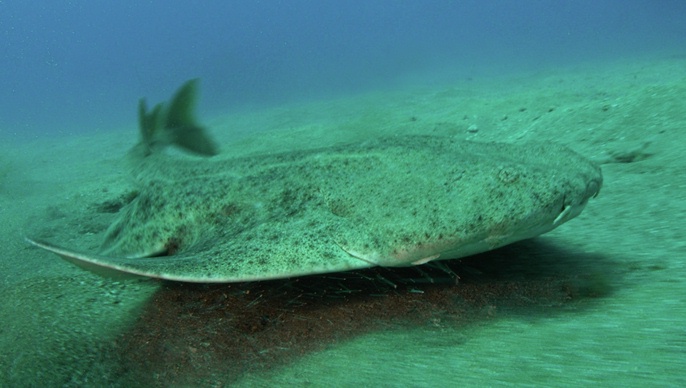 The angel shark is now critically endangered, which means it is in the category of species with the highest likelihood of becoming extinct in the wild soon. It’s actually already locally extinct in the North Sea (Ferretti et al., 2015). That’s quite a shock, because it used to be common from Scandinavia to north-west Africa (Rogers and Ellis, 2000; Ferretti et al., 2015; Raye, 2018). In the eighteenth century Thomas Pennant of Britain (1776, p. 86) said it was ‘a fish not unfrequent on most of our coasts’. Back when it was common, the angel shark was eaten and its skin was used in manufacturing. The fish was well liked enough to get local nicknames like ‘kingstone’ (first attributed in Merrett (1666, p. 186). One of its nicknames ‘monkfish’ was actually transferred to another species (the anglerfish, Lophius piscatorius). This generally happens when people carry on talking about a species after it becomes rare, and the listeners end up converting the name to a new species (like how people today call herons ‘cranes’ (Yalden and Albarella, 2009)), so we know that the angel shark has been an important fish for a long time.

But just like with the barn owl and the wryneck, it wasn’t direct human exploitation which led to the decline of the angel shark. There is no market for the angel shark anymore, and no-one means to catch it. The angel shark is going extinct because of industrial fishing methods. In the 1890s, humans started using steam-based trawler ships, which pulled a net along the seafloor to catch as many fish as possible (this is still the most profitable method of fishing used today). This method of fishing results in angel sharks being frequently accidentally caught, and has led to some serious changes to species presence and local abundance around Britain (Rogers and Ellis, 2000; Ferretti et al., 2015). Angel sharks also can’t repopulate areas very quickly because they stay in a similar area through most of their lives, except possibly when they breed, and they have comparatively small numbers of offspring (ICES Advisory Committee, 2017). At present they are commonly found only in the Canary Islands.

Is there any Hope for the Angel Shark?

However, there are some hopeful signs that the angel shark might be able to recover from its current situation. Regulations on the fishing industry in Europe have meant that angel sharks are discarded back into the sea when they are accidentally caught, and angel sharks have a high survival rate when going through this process (ICES Advisory Committee, 2017). The Angel Shark Project has been seeking out and analysing records of angel sharks in the Canary Islands, and this raises the possibility of restricting fishing in sensitive areas during the breeding and pupping seasons (Meyers et al., 2017). There is also a growing number of sightings being made in Wales and last month Zoological Society of London and Natural Resources Wales launched the Angel Shark Project: Wales, to educate anglers about how to safely handle and survey angel sharks, and to seek out records and stories of angel sharks from those who have seen them.