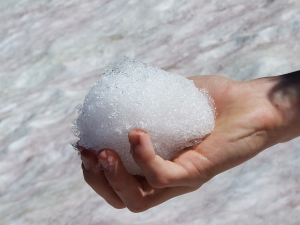 Most people will agree that the hardest thing about making a change is taking that first step.  This is the same whether your goal is to quit smoking, do more exercise or get into the habit of studying regularly.  Many of our online learners have been away from any academic environment for years, if not decades, and getting back into the habit and mind-set of learning can be difficult, if they ever succeeded at doing it at all.

The temptation is to start setting big goals.  A lot of self help books and guides will tell you this very thing. For example:

These are probably the right things to do.  They’re also, unless you boast supreme personal discipline, completely unlikely to work.  That is because they make incredible demands that you will struggle to keep up with, especially if starting from scratch.

The Snowball Effect is a psychological term that explains how small actions at the beginning can cause bigger and bigger actions ultimately resulting in a huge change. It’s a bit like the idea that a small snowball or pebble rolling down from the top of a mountain can end up causing an avalanche.

Fortunately, the snowball effect can work the other way too.  Just as one small bad thing leads on to a bigger and worse thing, so too can one small good thing lead on to another good thing.  In terms of self-improvement for example, it’s much easier to make a small change than it is to make a drastic one.

Consider instead of committing to an hour walk every day, starting with just a five minute stroll.  Likewise if you are giving up smoking you might consider using nicotine patches or gum to help beat the cravings.

It’s exactly the same for developing a desire to study. Don’t force yourself to read a whole chapter of your text book, or write an entire essay all at once if you are new.  Start by committing to only three or four pages a day, or perhaps writing two hundred words. Succeeding in meeting this targets will help to both build confidence in yourself and the self-belief you need to try harder.  As you find yourself able to achieve these smaller goals, you can build up the confidence to take on bigger challenges.  From studying for 10 minutes a night, you can increase to 15, or 20 until you habitually and easily manage your goal of 30 minutes every night.

So don’t look to run the marathon immediately.  Start with the first hundred meters, or the equivalent of whatever goal you want to achieve and you’ll get there.

Just enter the coupon code ADLBF2019 on the checkout when enrolling in a course to receive a 30% discount! Alternatively contact one of our advisors on 01227 789 649

Valid Arguments In order to be valid, an argument has to be based on evidence. For example, we might say: “Tigers can produce milk…” Or “Wildlife brings tourism…“ However, these are not valid arguments unless we give some evidence, or cite a source: “… Since tigers are mammals and all female mammals can lactate for

Your Argument is good, but you are still Wrong

A cataract is a clouding of the lens in the eye. Vision becomes blurred because the cataract interferes with sight, like a veil in front of the eye. Many individuals over 60 have cataracts and most of these can be treated successfully. The risk for cataracts increases as we age, but the average age for

Check these things before Submitting your next assignment

You have spent lots of time researching, working hard to produce a top quality assignment that will be appreciated by your tutor. You have timed it well; your favourite TV programme is about to start, you have some tasty food waiting for you. It’s now time to submit that assignment and wait for a response.