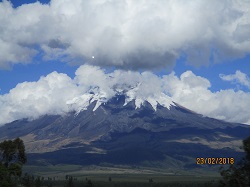 This month Ecuador has thrown up more surprises and gems. I fell in love! With a dog I met in Banos, and because of this, we decided to go back there. The last time I was there, I was not able to properly visit the town because it was the venue for my teachers’ conference. This time however, a hotel was booked and the town was investigated. It is such a great place with very different vegetations. It is higher than Mindo, where I saw the cloud forest, so there are fewer trees but it has wonderful waterfalls and the town itself is a haven for visitors. There are also termales – hot springs fed by volcanic water – some are hot, some are cooler, but always they are relaxing. One termales is right in the town, beside a beautiful waterfall where the Virgin Mary is supposed to have dipped her feet. These waters are considered sacred.  The town is lively and has two main squares with many activities in the areas.

The first time I went to Banos we stayed just outside town in a small lodging property and had to come into town for meals and so on. The first night, I got a bit lost and two dogs – strays who had been hanging around the hostel – decided to accompany me. Every time I went wrong, they waited or came to get me and took me into the town safely. The next night, one of them found me again and we became buddies. I put a picture on Facebook and another volunteer posted that the same dog took them to the waterfalls the next day and it became obvious that this is something this stray dog does habitually. On this visit, I decided to try to find the dog but the first night he was nowhere to be seen. I assumed he had been rounded up. Then, suddenly, there he was, in front of me, tail wagging. I bought him some food in one of the town squares and he came up to me, but immediately went back to a small group of men. He looked at me and settled down beside them as if to say, "It’s Ok, I have found a home."

Banos is amazing. It is surrounded by mountains and, just over the ridge, is Tungurahua, one of the tallest volcanoes in Ecuador. It is still active, erupting every 5 to 6 years. There are monuments around the town to people who have died or remembering evacuations. It is incredible how people live with this enormous potential disaster just over the ridge but it is so beautiful there, I can see why. The hostel we stayed in was a quirky gem of a place with artwork, collections of indigenous cultural things and a full barber’s shop. I found out that a sculptor had been unable to make a living sculpting and had taken up a side business in the barber's shop.

We also went back to Mindo and the cloud forest. It was a bit of a journey because the road was blocked, a landslide had killed four people previously. We turned up at the bus station and there were no buses. We went to the bus station the next day – still no buses. That's when I thought, why not get to a nearby town and see if there is another route? We got to a place called Nangalita, about 3 km as the crow flies from Midno. The bus came to a halt and could go no further, so I asked the greengrocer if there was a taxi and could there be another route? She decided her husband could be a taxi for the day so off we set! It was a 30 km trip on a dirt track but we got there in one piece. The beauty of being in Mindo at this time was that we were one of the few tourists who had made it through.

We had Carnival with the locals! A Carnival in Ecuador is not just one parade over one day, it is four days of madness with people spraying each other with foam, water, eggs, flour or any other harmless substances. So, we danced in the streets like everyone else and thoroughly enjoyed the re-visit. We saw many plants, lots of butterflies and the beauty of the place once again enthralled us.

The Jazz Festival was on in Quito when we returned. I saw Lizz Wright from the US, a local support band (who were vert free and just amazing), the Demon Shufflers from Canada and several small local bands who played jazz with such an enthusiasm, I found it just like touching base with home. Brilliant.

I have also discovered a very beautiful potato. Let me explain. Quito, as I said before is noisy, busy and mad, but it keeps revealing little surprises. One of which is Guapulo – the name means ‘big potato’. The entrance is just behind one of the larger hotels in Quito and you go down steps forever – then you come to a road. And this road goes down and down. It is cobbled, lined with artisan shops which, some cafes and ends up at a sanctuary. On the way down, we looked up and saw some people eating under umbrellas. There was nothing obviously there, but a closer look revealed it was a local eaterie and yes, we could join them. We had fish and vegetables and lovely fizzy pop, overlooking some of the best views in Quito. You could see for about 30 km and it was so green. It really was like being in a village yet, if you looked behind, you could see tower blocks rising in the city. An amazing find.

I have also done a few other things. I played piano in the house of Guayasamin, an indigenous artist who bequeathed his wealth to the nation. I also played in the Hostal d’arte in Banos. I have stroked and fed dogs in Mindo and Banos, sailed above the tree canopy once again, watched people jump from a very high bridge (attached to ropes) and walked miles to find a waterfall, only to find a gate saying ‘closed’ across the path – apparently it was too wet! Bit by bit, I am falling for this amazing country and its people. This land where mountains regularly spit hot dust and ash, where the land is almost constantly on the move and where nature gives off its best at almost every turn once you are away form the cities. Ecuador is one amazing place. Next month – the Amazon!