Why You’re Stuck in Work on St George’s Day 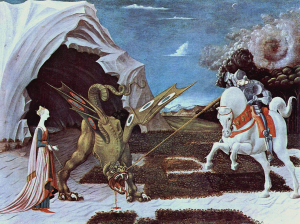 Today in ADL land it’s our national day – St George’s Day!   Located as we are in lovely Canterbury city in that garden of England – Kent, we are naturally ready  celebrate England’s national day as so named by its patron saint.  As such, you are all invited to join us in such traditional celebrations as…

… well not much really if we're honest.

Sadly, unlike our European neighbours, other countries around the world and even the other constituent nations of the United Kingdom St Georges day has the almost embarrassing trait of being nearly forgotten completely by all so many of our countrymen.  It’s not even a bank holiday.  While our Irish and Scottish friends enjoy a day off on the day of St Patrick and St Andrew respectively we in England, if we are aware of it at all, must celebrate the occasion from work or school.

Hyperbole and the Saints

Perhaps part of the reason St George and his day are muted across the length and breadth of England is a slight sense of national embarrassment.  While the idea of a patron Saint who slew dragons and saved maidens might make for a compelling TV series or film in a post-Game of Thrones world, it struggles somewhat to be taken as truth in the face of archaeological evidence that suggest the last truly massive dragon like creatures died out about 65 million years ago.

In the place of medieval stories, relatively little is actually known about the real St George.  According to the BBC the real St George is believed to have been a Roman soldier from Cappadocia in modern Turkey who went sent to Palestine refused to join in the systematic persecution of Christians in the region.  In 303 AD he was martyred and executed.

His association with England supposedly began with English Knights during the Crusades who reported the Saint making a miraculous appearance and leading them into battle during the siege of Antioch in 1098.   From here the legend grew until in 1222 he was announced as Patron Saint of England and his feast day formalized.

We don’t do that sort of thing…

One other suggestion advanced for why the English don’t pay much heed to their patron saints feast day is advanced by historian Diarmaid Macculloch who, when speaking to the Huffington Post suggested that England’s protestant background may have played a large part in Englands non-reverence of its own patron saints.

The reverence of the saints is very popular in Catholic countries, however during the reformation and the European wars of religion, the Protestantism that arose rejected many Catholic doctrines, meaning that reverence for Saint George may have fallen by the wayside.   St George ofcourse was never done away with, and featured often in English literature through the ages such as the famous cry in Shakespeare’s Henry V during the battle of Agincourt when the king urges his men to “Cry God for Harry, England and St George”

Ofcourse, legend or not nearly everyone loves a bank holiday.  So why is it that successive governments have buried the issue and refused to give England a national holiday?  Doubtless for the same reason poor Wales is also denied a day off for its patron saint David – money.

According to some estimates, making St Georges Day a bank holiday would cost the economy £2.4 Billion.  Nevertheless, popular pressure continues to grow for the introduction of Bank Holidays for both Patron Saints – St George has been a regular fixture at the Houses of Parliament since 2006 and 87% of Welsh people want their patron saints day to be a bank holiday.

But until things change, we’ll be open for business every 23rd of April.  Just as we always are.