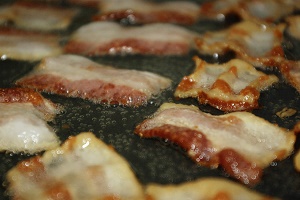 In their ongoing effort to expose the truth that everything on the planet is trying to kill us, Scientists have recently announced research that Bacon, much loved breakfast food and national reserve currency of Denmark, may be as dangerous as cigarettes as a cause for cancer.

As little as 50 g, or the two regular rashers included in a full English breakfast can increase the risk of bowel cancer by 18% according to a report by the World Health Organization.  The main accusation delivered against the meat is its nature as a processed meat, by which the salting, curing or smoking used as a preservative reacts with the meat to produce carcinogenic compounds which may lead to cancer.

Joining bacon in a rogues gallery of the accused are similar meat products including:

Furthermore, the report is also expected to suggest the Red Meat is a probable cause of cancer.  Red meat includes pork, beef and lamb. This tallies with research by the International Agency for Research on Cancer (IARC) who have a scale of 1-4 for whether or not certain substances are likely to cause Cancer.  On their scale, processed meats are rated as a 1 as a definite cause of cancer and red meat, while red meat is a 2A or “probably causes cancer”.

That said, while the WHO is expected to mention the potential problems of red meat, it is also supposed that they will reiterate the traditionally understood benefits eating it brings.  These include being an excellent source or Iron, Vitamin B12 and essential proteins for building the body.

Such benefits alas are notably absent from various processed meats which, despite being a ready source of protein have long been maligned by nutritionists for their fat content and other chemicals.  Certainly hamburgers have never had much of a reputation as a health food.

That said though, simply saying that processed meats cause cancer is not necessarily the entirety of the story as nutritionists will doubtless already know.  People who consume large amounts of these sorts of foods tend to come from certain demographics.  Often they eat these foods because they are far cheaper than higher quality foods.  Many find it a challenge to find time to cook during busy and demanding days, if they even have the skills to prepare food to begin with.

Another problem is that people who eat a lot of meat are often sacrificing room on their plate for healthier fruit and vegetables, many of which contain chemicals that can help reduce the risk of cancer.  While many places offer the option of “doubling up” your hamburger, or adding bacon for a small surcharge generally more greens aren’t on the menu.

Nevertheless, despite all the warnings it’s not all doom and gloom, or at least not quite so bad as people may make it out to be.  It’s true that the IARC, in rating bacon as a category one substance, are saying effectively that bacon is a cause of cancer.  But it’s important to remember that category one also includes asbestos and sunshine as things that can bring on the disease.

IARC’s category data also does not emphasize the percentages or chances that a particular substance might cause cancer.   Certainly while it’s largely agreed that too much sunshine may be a leading cause of skin cancer, we don’t largely flee at the coming of the sun nor warn against it with the same vehemence we might talk of smoking.   In the case of bacon and other processed meats, it’s believed that while there is an 18% increase in cancer risk for frequent eaters, this has to be paired with a base chance of 5% in contracting cancer from the meat over the course of a lifetime.

So given that your base chance of developing a colorectal cancer is already 5%, an 18% increase on that barely pushed your life chance of getting the disease by 1 point to 6%.  You’ll have to decide for yourself if that 1% chance is worth a lifetime of bacon denial or not.