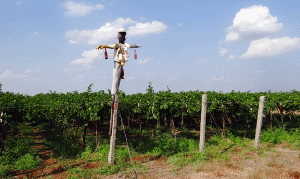 Pity the poor scarecrow.  For all the straw stuffed into a set of old clothes, all the funny hats and scary faces drawn on the face, it rarely seems worth the effort, with crows and other birds happily piercing on the outstretched arms of the mannequin. While the intention is to fool the birds into thinking there is a human in the field and staying away as a result, the reality is that many birds see through the ruse.

Drawing on the analogy of the scarecrow when talking about arguments is the straw man fallacy.  In its simplest form, making a straw man argument is when a deliberate attempt to misrepresent an opponent’s position is made.  Generally, this is done in an attempt to discredit an argument by over-simplifying the issues with half facts and opinions which can be persuasive to an audience that is otherwise not well informed about the topic at hand.

A straw man argument actually comes, not from scarecrows in fields, though they have obvious similarities, but from training dummies that were used in olden days to train soldiers, guards and other fighting sorts.   A straw man “opponent” was the perfect target – it didn’t hit back, couldn’t bleed or die and could be hit has hard as the training person desired.  It was also completely unlike what they would go on to face on the battlefield against real enemies who did in fact bleed, hit back and try to not do the dying.

Straw men are often favoured in politics where politicians, who may or may not be experts themselves, will intentionally try to present a complicated issue as simple in order to win support from the ignorant members of their electorate.

A familiar example of recent times is an insistence among certain political groups to try to portray national budgets as working the same as household budgets, which is usually followed by an appeal that “We must live within our means”.  Such simplification is a deliberate obfuscation of the reality that a national economy is nothing like a household budget, but it does present an easy to understand message to an electorate.

Science is another field replete with straw men, usually in order to advance one or another agenda.  For example, an individual might claim that because it snowed this year in April, global warming is clearly not real.  However this attempts to use one incident to misrepresent an entire argument that is far deeper than what happened on one, isolated occasion.

Avoiding Straw Men In Your Work.

When writing essays and assignments you will often be required to put together an argument for your case.  However, it is important that you understand whatever arguments is against you properly and coherently.  This is so that you can debate against the points that are actually being raised.

If you don’t take the time to do this, chances are you will end up arguing against an idea that exists only in your head.  On the other hand, sometimes you will be require to argue against straw man positions. In this case, it is important that you understand the goal is to expose why the argument put forward has no basis in reality and is thus empty.