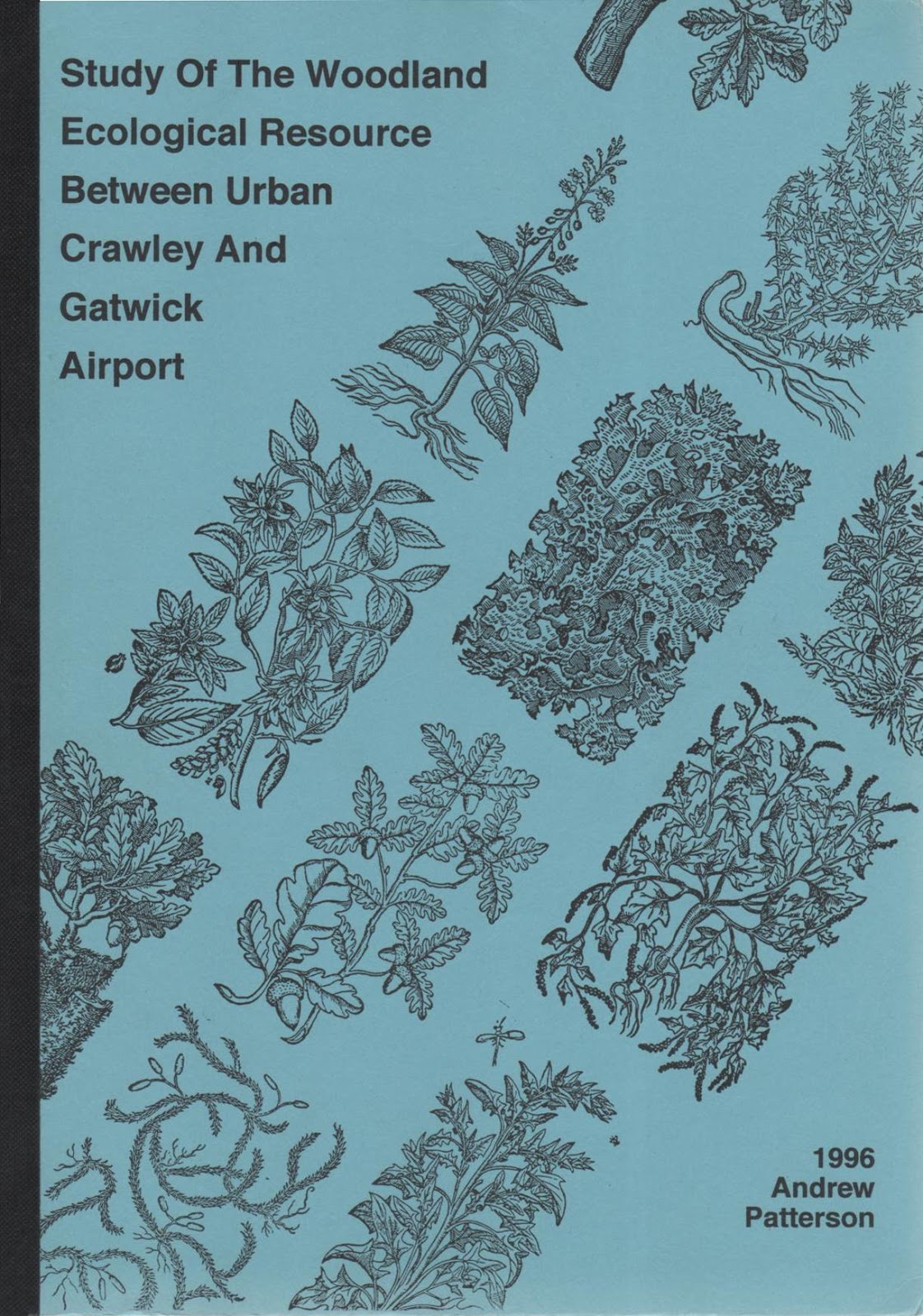 Between February and October 1996, I worked voluntarily with the Gatwick Area Conservation Campaign (GACC), a conservation group of house and landowners with a collective interest in preventing any expansion of Gatwick Airport by building a second runway. Although GACC were opposed to the extension of a second runway, my position was one of impartiality in seeking to scientifically ascertain the state of the woodland and ecological resource of farms surrounding Gatwick Airport. The work was intended to be of use to GACC, but also to developers and planners who were interested in the conservation status of the woods.

Apart from agreeing the work with GACC in principle, I had nothing to go on in terms of  contacts or local knowledge, so I had to use my wits and develop some connections in the area. I used a variety of information sources, such as West Sussex County Records Office and libraries, deriving historical data from Tithe maps circa 1840's. I also attended a Gatwick Airport environmental open day, which I had noticed was promoted through a local agricultural college. I also liased with local conservation bodies such as the Sussex Wildlife Trust, English Nature, West Sussex County Council planning department, and developed relationships with local naturalists and landowners. As 1996 was a bit before the age of the internet, most of this communication was in written or verbal form over the telephone. I also sent monthly progress reports to GACC and operated an expense account for small items like train fares, tools (like a soil pH meter) and stationery, etc.

The implementation phase of the survey involved visiting each site in my spare time, at roughly the same point in the year to avoid any errors connected with seasonality; species could be over or under represented with variation between my farm woodlands if the surveys were too far apart. Precise scientific recording and botanical observations were necessary, including making accurate drawings of the woods and dividing them up into ecological sections, or parcels. For my recording template, I used a modified version of the Leicester Habitat Survey, which was a standard methodology at the time and gave a good yardstick to compare the sites by. A great deal of care had to be taken not to disturb wildlife or property, even when consent had been given to perform the survey.

I used the findings of my survey to make a formal presentation for my NVQ/ City & Guilds in Landscapes and Ecosystems to an exam board. The survey write up took the form of a 130 page booklet, including maps and colour photographs. The contents included an Introduction, a section on Methods & Protocols used, general notes on the survey area, previous surveys, my own surveys (site by site), and an Analysis and Conclusions. This led to some paid consultancy work for GACC, and I understand the survey was used as part of the runway II consultation exercise in consideration with other planning documents. Ultimately, the 2nd runway at Gatwick didn't go ahead. The farmland surrounding Gatwick Airport is strategically valuable as a buffer between the airport and the adjacent town of Crawley. The land provides a wildlife corridor weaving between the rural Weald landscape and the town.

It includes a mixture of ancient woods and plantations, copses, scrub, river corridors and waterways, and meadow land. Whilst there were few examples of anything botanically rare or uncommon, the area does contain woods which were listed in the Ancient Woodlands Inventory and date back to  pre 1600. Owing to my survey, alterations were made to the Ancient Woodlands Inventory to bring it up to date. There were some nice stands of Common Spotted Orchid in some of the woods. If the second runway at Gatwick didn't go ahead, a Millenium Forest was planned for the area, with picnic facilities, walks and trails, outdoor pursuits, etc.

When I look back at my career in conservation, the work with GACC clearly gave me a boost and helped me to develop my skills in survey work and consultancy. Using the courses in conservation, ecology and environment that ADL has to offer, could a new career lie in wait for you?

What’s The Best Way to Google?

Google receives 63,000 searches every second and is the biggest repository of human knowledge every constructed since the burning of the library of Alexandria. It is the best way for us to access new information and use cutting edge technology to run our businesses, blogs and banks. With so much raw data available, a valuable

What We Can Learn From The Daily Routines of Artists

Creatives might seem to live precarious and messy lives, with little in the way of a daily routine, occasionally punctuated by eureka moments. Although this is undoubtedly the case for some, most artists held meticulous daily schedules to aid their creative process. In their lifetimes’ artists like Beethoven, Mahler, Satie and a whole host of

Organisation Tips To Keep You Happy And Productive During Lockdown

It’s been well over a month into lockdown, and we’re getting into the flow of things. It may still be like living in a strange, somewhat dystopic parallel universe, but it feels more normal now. We should try and make the most of this time to learn how we work best, so why not experiment

Interesting Laws Passed 400 Years Ago To Combat The Black Death

With Covid-19 still looming over us, it is easy to forget that all the other epidemics that have happened through history. Today I will be covering some actual laws passed that the people of the time hoped would curb the infection. Lots of their ideas came from their firmly held belief in tradition. Because human

Fabulous Gardens To Visit During Lockdown

We know that that lockdown is a bit of a bummer, you can’t meet up with friends, go shopping or take a trip down to the pub. So, why not take a journey with us through the modern wizardry of computers to see some of the worlds most exceptional gardens. Maybe get some inspiration for