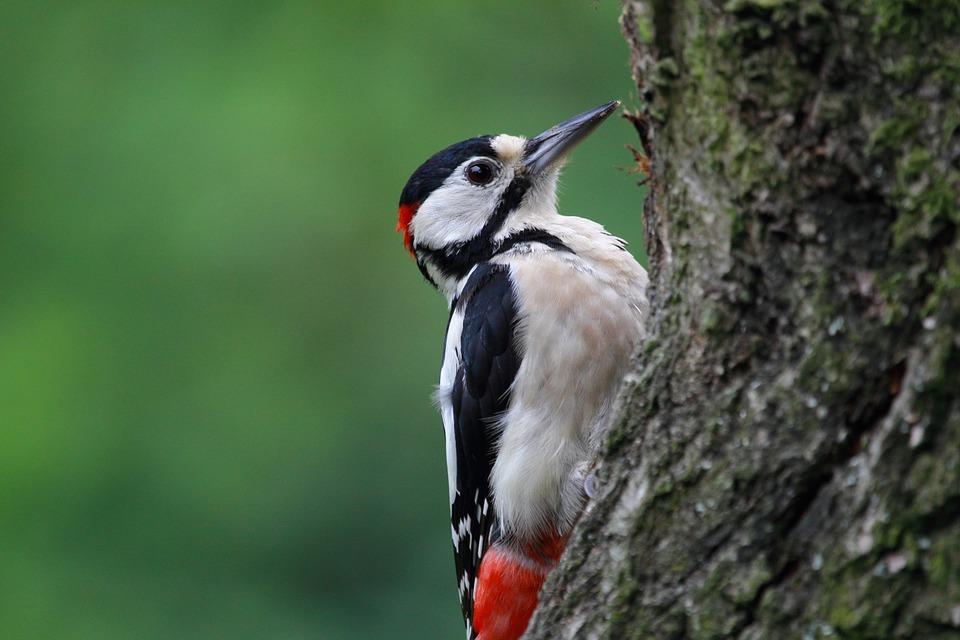 I remember the first time I saw a Greater Spotted Woodpecker. I was in a beech woodland in Sussex during autumn time. The leaves had started to turn golden brown but the wood had enough canopy to instil a cathedral-like sense of calm, with the trees around me like majestic pillars. I was tidying up some clearance brush from a conservation job, and the bird flew silently over my head, wings spread wide, and landing on a tree 10 ft away, it started to peck furiously. I was stunned into reverence. Whenever I see a woodpecker now, I am transported back into that sense of awe.

You may have recently heard some new information which questioned one of the classically held beliefs in biology; that woodpeckers don't get brain damage despite their lifestyle of pecking their beaks against tree stumps. They of course do this with considerable force up to 1,000 times that of gravity. Scores of times per minute. All day long. Woodpeckers have been studied in some detail by scientists, so how does this new information stack up against what we already know about woodpecker biomechanics?

Farah, Siwek, and Cummings from Boston University School of Medicine's Department of Anatomy and Neurobiology published research this month in the Public Library of Science (PloS) that demonstrated the presence of tangled tau proteins in the brains of woodpeckers. Tau proteins have been found in the brains of Alzheimer's patients and are thought to be implictaed in the disease process.  Normal tau acts like a conduit to help nerve cells transport food and other molecules. But in Alzheimer's patients the protein's strands collapse into tangles and eventually the cell dies. To date, there have been no microscopic tissue studies exploring the potential existence of such nerve damage in woodpeckers. It is not known from our study whether the tau accumulations are pathological or result in behavioral changes in woodpeckers. Despite the findings of tau tangles, the birds don't exhibit any behaviours that suggest brain damage.

Woodpeckers don't just need their beaks to locate and remove insects and sap from under tree bark. They additionally make nesting hollows which demand much greater investment of pecking activity. To mitigate against this natural tendency to incur brain damage, woodpeckers are bristling with many overlaying evolutionary adaptations to cushion the forces of beak strike against a solid object. Much of this information has been discovered within the last 10 years, or at least seen in its proper mechanical context. I have summarised these adaptations in the table below.

To expand your interest in the natural world, ADL have courses in Ecology, Conservation, Permaculture, Eco-Tourism, Adventure Activities, and Animal Studies.